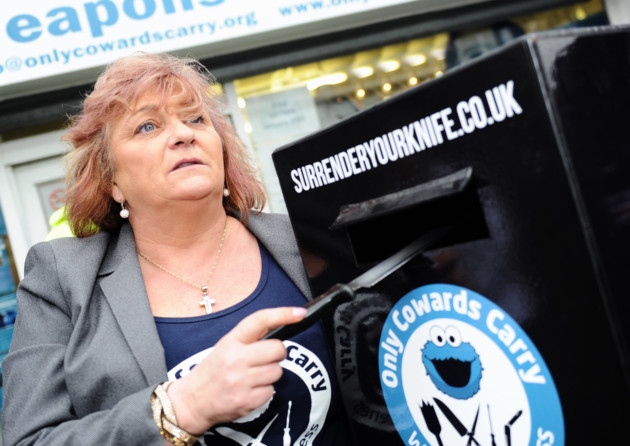 Caroline Shearer, whose teenage son Jay Whiston was fatally stabbed at a house party in Colchester in 2012, collected more than 50,000 signatures in her campaign to add weapon awareness education to the national curriculum.

Ms Shearer, who founded the charity Only Cowards Carry Weapons Awareness, handed the petition to Downing Street on June 30.

But in response last week, Edward Timpson, minister of state for children and families at the Department for Education, said guidance available for teachers planning for PSHE (personal, social, health and economic) lessons is a “useful tool” for warning students against the dangers of violence.

He said in relation to weapons awareness teaching that the department believes “individual schools are best-placed to determine what PSHE teaching is most appropriate for their pupils according to local need”.

But Ms Shearer described the current PSHE programme of study guidance as “very limited” and said it does not specifically address the issue of knives and weapons.

She added: “We need action and this is not good enough. Only Cowards Carry has been working tirelessly with communities and schools.

“We have taught over 30,000 youngsters and therefore feel that the letter is not only demeaning, it is a total insult to all decent parents and grandparents, as well as the over 50,000 people who passionately supported and signed the petition for weapons awareness to be added to the school curriculum.

“Very few schools use the PSHE lessons as it is not mandatory and it is down to individual schools to determine what PSHE teaching is appropriate.

“This is outrageous. How can it be that some schools may cover some vital information that could educate young people about this prolific issue and others won’t?

“So disappointed is an understatement. To be passed off like this makes me question if we are really listened to by the powers that be, or are we just another aggravating thorn?”

The letter comes after figures from the Crime Survey for England and Wales showed knife crime in Essex rose by more than 20% last year. The number of serious offences involving a knife in the county increased from 523 in 2013/14 to 631 in 2014/15.

Ms Shearer said people ranging from police chief inspectors to the armed forces are still signing her petition, insisting it is not a “dying craze”.

She added: “The letter [from Mr Timpson] states they already work with Crimestoppers and Fearless and how it teaches the importance of reporting information about knife carrying through its website.

“We are extremely supportive of Crimestoppers and their work. However, we need more than just reporting of weapons crime, we need our young people safe, educated and aware.”

A Department for Education spokesman said: “Every child’s death is a tragedy and the work of campaigners like Ms Shearer is vital in raising awareness of the devastation that knife crime can inflict on communities.

“Young people must understand that carrying a knife only puts themselves and others at risk. Schools can already include lessons on weapons awareness and we know good schools already do so. We have provided schools with a range of high quality resources and support to tackle issues like this.”